I send my sincere thanks and appreciation to the hundreds of friends who made so many inspiring comments about my post on the Trail of the Chicago 7 movie. Many requested that I comment on the film after I saw it. My comments are long so I’ve divided them into three parts. I will welcome your thoughts and comments.

Review of Chicago 7 Movie–Part Two
Tom Hayden’s movie character seemed to have endless conflicts with his lawyers and defendants, especially Abbie, whose film character tried to educate Tom on what a political trial was. While that was silly, the movie Tom argued that voting was the only way to change a social order. That was simply absurd. Tom was my very best friend at that time, and it saddened me to see the founder of Students for a Democratic Society have his brilliance sullied by a writer who clearly had no idea who Tom really was.

John Froines and Lee Wiener were college professors who came to the demonstrations in Chicago and got singled out with a federal indictment to make college professors across the country think twice before supporting the anti-war movement. In the real world, the government’s tactic never worked. In the movie world, John and Lee’s names were read by the court clerk but otherwise, they didn’t exist in the movie. That was certainly not how the real defendants felt at all.

Tom Foran was the lead prosecutor for the U.S. government, and he wanted to run for governor of Illinois. Our trial was the perfect venue for him to ride the wave of patriotism and flag-waving into a successful election until he got knocked off his wave when he cross-examined me before the jury and world press. That cross-examination ended his career in politics. In the movie, his fictional character movie barely existed. I have no idea why since he was the lead prosecutor and most colorful by far. The movie makes you believe Richard Shultz was the government’s star. I really don’t know why.

My character was especially hard to recognize as much as I tried. The movie Rennie was a complete nerd who was afraid of his own shadow and worried his girlfriend’s parents might not understand the protest. My role in the movie trail was mostly non-existent like Lee and John.

The two most dramatic events in the actual trial were the chaining and gagging of Bobby Seale and the unique opportunity I had to explain to the world why we came to the Democratic National Convention in Chicago in the first place. Bobby was chained and gagged for four days during the actual trial and each day, the pressure bandages around his head got tighter and more and more intense. When I sat next to him I could see blood out of the side of his mouth from the gauze stuffed with force into his mouth before he was carried chained and gagged into the courtroom. No matter how hard the marshals tried to quiet Bobby with their gauze and pressure bandage, Bobby could still be heard as he said over and over, “I demand my constitutional right to represent myself.” Despite being chained and gagged, he could still be heard in the courtroom. He was also heard in Africa, Europe, Asia, South America, Canada, and the United States as well. That was what actually happened. The movie gives you no idea of the intense four-day buildup as Bobby was chained and gagged in front of the jury. The movie didn’t even explain the global impact of this extraordinary event–a black man chained and gagged in an American courtroom for wanting to represent himself.

Only Abbie and I took the witness stand during the trial. I was the coalition coordinator of the Chicago demonstrations and responsible for days of negotiations with the Mayor’s office that result in daily press conferences that got the American public fully focused on the “permit issue” going into Chicago, I was in the best position to explain to the jury why we came to the Democratic Convention as the representative of our non-violent coalition.

When I was on the stand facing the jury, I held up a “bomblet” from a cluster bomb unit that was given to me by a North Vietnamese woman who had lost her entire family from this weapon. I explained to the jury that if this bomb went off in this courtroom right now, we would all die but the courtroom would still be here and another trial of America’s Vietnam war could go on. This was a U.S. bomb that could not destroy the courtroom. It sends iron pellets that might hit your leg and ricochet up the leg causing a slow bleeding to death. It was the main weapon used by the U.S. air force against the Vietnamese population for living in their homes.

In the actual trial, we had this one chance to clearly and dramatically explain why we came to Chicago. The movie made no mention of this 3-day drama on the witness stand or the Judge’s hysteria that I was getting away with making a reasonable case before the jury. I got two and a half years in prison for my conduct on the witness stand. The movie never explained my support from the U.S. Justice Department in negotiations with Mayor Daley for permits. It even subtly left the impression that the defendants may have really wanted to incite a police riot. It never explained that a coalition of 150 national organizations set out to bring 500,000 people to protest nonviolently at the Democratic Convention and that the Chicago Mayor refused to grant permits or recognized our right to assemble and petition the government that denied our right to assemble in Chicago.

We went anyway which was courageous. When we were camped out at Lincoln Park hosting a festival of life, at 11 pm, waves of police entered the park clubbing and tear-gassing peaceful demonstrators and reporters while the whole world was watching. The movie never mentioned that this Chicago police riot was watched on television by more people than watched the first man landing on the moon.

Later, when a national commission studied who caused the riots, the investigation officially concluded it was a police riot. That report went to the top of the NY Times bestsellers list and was certainly the most favorable thing ever written about me. There was no mention of the Walker Report conclusions in the movie, however.

You could not be sure if the government undercover agents who testified against us in the movie trial were telling the truth so help me God or making it up. They certainly all agreed that we came to Chicago to start a riot. I would have gladly given Sorkin our massive evidence that the government made up all their evidence against the defendants. That reality never made it into the movie which was another missed opportunity for the movie.

The lighting for the movie was pretty dark and I would agree there were some dark moments during the real trial as well–like the day the chairman of the Illinois Black Panther Party was murdered by police sleeping in his bed. Fred Hampton was a close dear friend, and his murder during the trial shocked us to our core.

But the real trial wasn’t all dark. There was humor and joy and hope in the real trial. We had differences in style but we became a family and got along, tightly bound in our opposition to the Vietnam war. Every defendant knew this was a rare opportunity in American history to put the government on trial before a world audience. 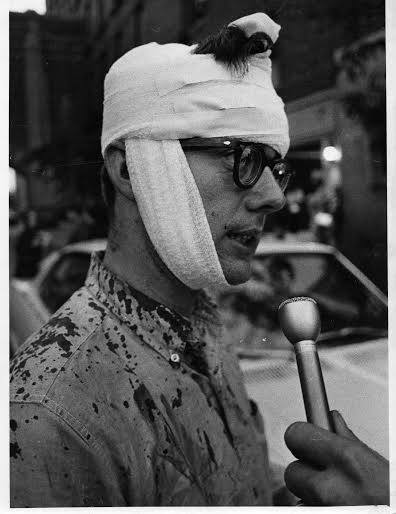 Click here for PART 3 Review of The Chicago 7 Trial