Earth Day’s considerable network spanning 193 countries has evolved since 1970. Earth Day is now the legitimate voice of the environmental global constituency.  Can its current leadership rise to the occasion and mobilize the world to change the climate crisis outcome?

The one coalition that should easily grasp the need to rise to the occasion and change the outcome is Earth Day. If this  global coalition is unable to understand the full measure of alarm facing the human race and do whatever it takes to reverse course on greenhouse gases in the next decade, Plan B becomes the only remaining option for the person who yearns to know, “what should I do?”

Plan B acknowledges the early stage of awareness of our species –an immature state of awareness that has made us unable to change our ways. Plan B sets out to create a new human being. Plan B envisions self-sufficient thriving families and communities based on a new human-Earth accord. Plan B is the wisdom to prepare now for the consequences of how humanity has lived on the Earth.

One week before Earth Day 2019, the New York Times Magazine devoted a Sunday issue to the climate Issue. Any person who thinks we have plenty of time to change the outcome or still believes a fundamentally new course of action is not a requirement for the future of humanity should read this issue.

To fearlessly face the Reckoning—that’s what I call the world’s most challenging crisis—we could get started with a simple solution. We could start April 22 with a single demand: cease and desist burning all greenhouse gases now.  Of course, Earth Day will have to become more than a once-a-year event. And it will have to include massive nonviolent coercion at every physical source of greenhouse gases. Is Earth Day ready for that?

In the late 1960s as the Vietnam war became a global nightmare, U.S. students responded by mobilizing teach-ins to educate their countrymen. Students combined mass mobilizations with civil disobedience. They even organized a national student strike that shut down 90% of the colleges and universities in the United States. Many GIs in Vietnam literally abandoned their posts. Military parades in the United States were cancelled because of the massive anti-war opposition inside the military itself. Like the Sixties, Earth Day will need to start that Sixties engine again—inspiring every student in America to join a movement that will change the world. That means mass mobilizations as well as civil disobedience anywhere greenhouse gases are manufactured or sold.

The human race seems mostly clueless about what is coming. Pure and simple, that means, Earth Day teach-ins will need to penetrate everywhere, including rural communities, Wall Street, the halls of Congress, and any town hall meeting where candidates for president are speaking.

Leading climate scientists like James Hansen still believe it is possible for the world to stay under 2 degrees Celsius—provided the human race can eliminate carbon-dioxide emissions. The terrifying problem is that time is super short and the mountain we have to climb is super steep. We have not even begun to understand what needs to be done. And we are very far from doing anything significant either.

Think about it. Where are the laws that require corporations to give humanity a future? Where are the carbon taxes, massive subsidizations of renewable energy, and the complete elimination of financial support to fossil fuels? Where are the 5 million activists who will go to jail for non-violent resistance. Where is the Marshall Plan for reforestation and carbon capture? Instead of Marshall Plans supported by every government on Earth, the United States bears witness to the tragedy of our age—a Republican party that controls the White House and Senate with a strategy that denies and deepens public ignorance about climate change.

As a large society, we seem unable to face the music–that we are the guests and the Earth is the host on this planet. Capitalist societies have shown themselves to be virtually incapable of reducing carbon emissions on their own. Instead of promoting public debates about how to mitigate the coming climate disaster, the Republican solution is to let everyone fend for themselves and let the market solve a global crisis that was created by the market in the first place. In the Republican mindset, anyone who thinks differently is a hardened socialist. The Grand Old Party has made the same argument over and over again too. Remember, it was the Republican Party that called people socialists when they lobbied for an 8-hour workday and social security.

If there is no reasoning or rational argument that can be heard by climate deniers or the White House, it may be the natural consequences of climate change itself flooding homes and leveling institutions that gets their attention. Unfortunately, it’s too late for the future of humanity.

We need a massive teach-in strategy that includes direct and non-violent coercion that can be felt by lobbyists, senators, congressmen, Fox News and the Heritage Foundation. That’s the remaining option for activists before us now. Can Earth Day mobilize Millennials and Generation Z to answer the call for humanity—when it really is the last call?

Many people attending this year’s Earth Day event may think that gang violence migration is the central issue facing the United States today. The press has not made it clear to the public that coffee farmers in Honduras are packing their bags for the United States right now—and not because of gang warfare or corruption either. It is their coffee plants with wilted leaves dying from rising temperatures and flash floods triggered by volatile weather. Poor farmers are always challenged to survive, but with the new world of climate change, there is a new tipping point –a powerful new reason for leaving Central America for the United States. Of course, the United States has its own climate challenges as well, from rising sea levels in Miami Beach to massive wild fires in California. With time running out for humanity, isn’t it time to face the crisis of our time?

If Earth Day is unable to figure this out, it is going to be Plan B for us all. 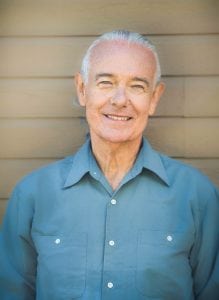 Rennie Davis was the coordinator of the largest anti-war and civil right coalition in the 1960s. Today he is an Earth Whisperer mentor.